Due to essential maintenance several of our online services will be intermittently unavailable on Friday 2 December 2022 between 5pm - 6pm. We apologise for the inconvenience.

Giant hogweed is a highly dangerous plant as the sap is toxic and can cause significant blistering and scaring of the skin. If you think you have giant hogweed you need to be very careful when treating it.

Luckily giant hogweed is not a widely spread plant but you may still come across it in the wild.

Medical professionals say you should and wash the affected area with plenty of soap and cool water. You should then cover the area and keep the skin out of sunlight for 48 hours.

If you develop a rash, blisters or feel unwell you are advised to seek medical attention immediately by visiting a doctor or hospital.

Do not touch your eyes as it may cause blindness.

Giant hogweed can grow to 5m tall. Its flowers are white and produced in umbrella like clusters.

Giant hogweed is mainly found close to sources of water such as rivers and ponds as it is prefers a moist environment.

Giant hogweed typically has above 50 white flower stems on each umbrella stem, native hogweed normally has less than 21.

The stem of giant hogweed is generally smooth where native hogweed is reasonably hairy. 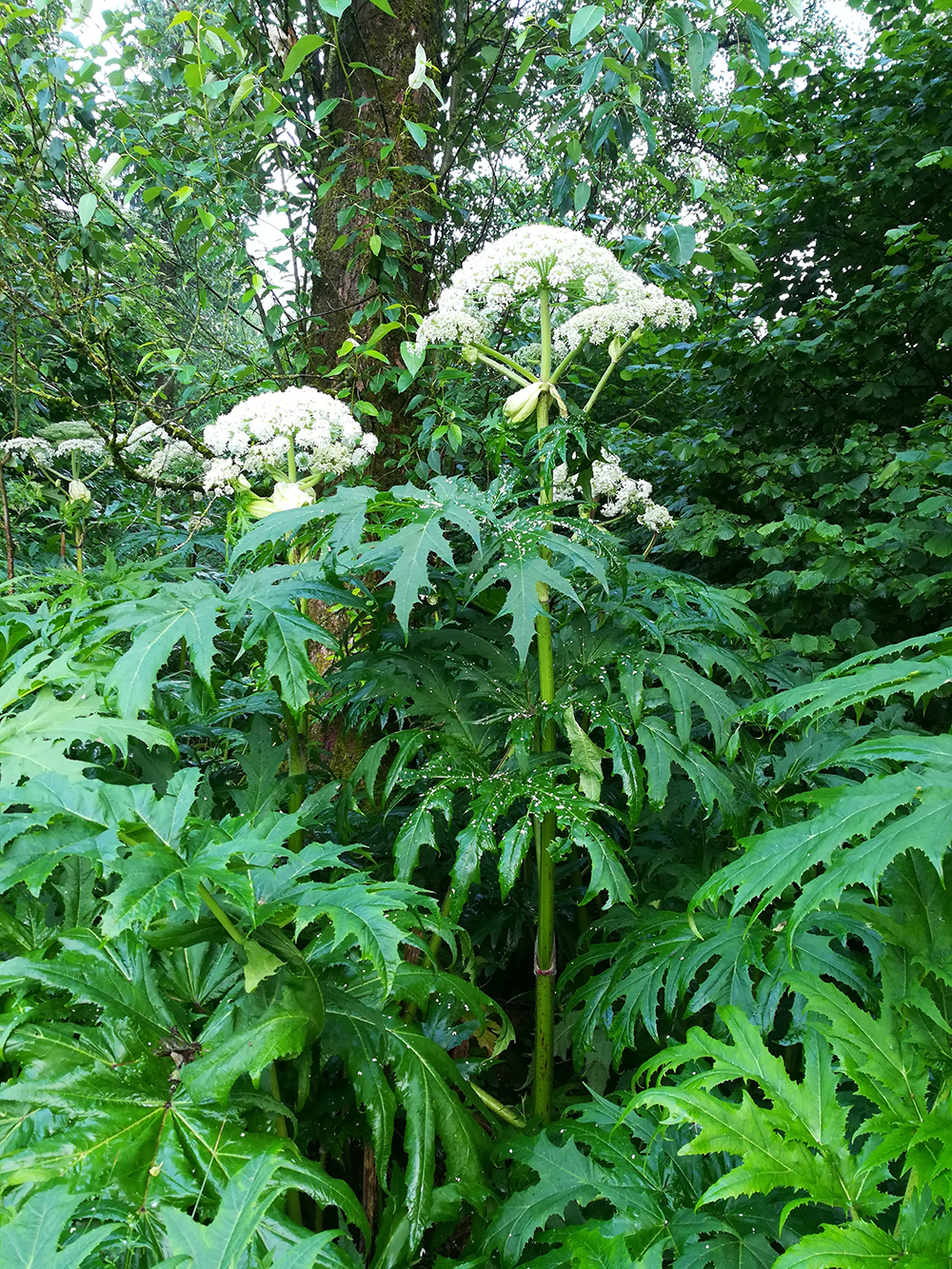 An example of giant hogweed leaves 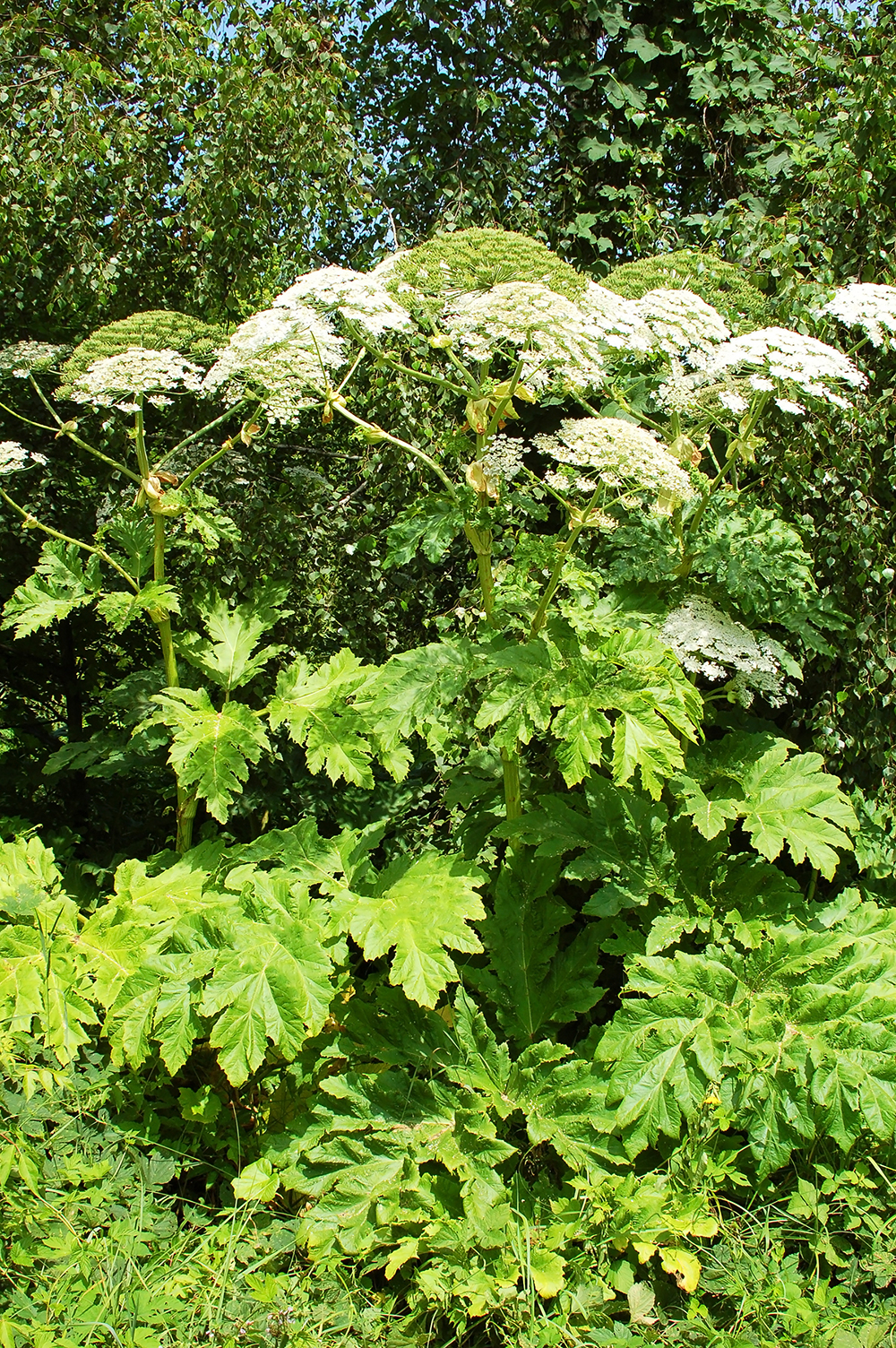 An example of native hogweed leaves

The wildlife and Countryside Act 1981 says:

This means that all giant hogweed should be subject to treatment to kill it. You can be fined or prosecuted for allowing the plant to grow or spread.

We treat giant hogweed with our annual spraying programme. We will continue to treat any re-growth of giant hogweed on an annual basis until the roots have been killed. This can take a couple of years.

Visit the GOV.UK website for detailed advice on treating giant hogweed and other harmful weeds.

The best way to treat giant hogweed is to spray the foliage with a glyphosate based weed killer. Burning the shoots with a weed burner will not kill the roots.

Always follow the instruction on the product and ensure any foliage is well sprayed.

Continue to spray emergence of foliage throughout the year.

There are private companies which can contracted to treat your giant hogweed. Details are available through an internet search.

Giant hogweed is a bi-annual. If the has been treated with Glyphosate the roots will also be dead.

Ensure you wash and disinfectant any tools used to dig in the area.

If the plant re-emerges continue to spray with weed killer.

In winter the plants stems will go brown and at this time of year you can cut the stems off. It is best to do this in February to make sure all stems are dead.

You can either burn the vegetation or compost down.

Where material has been burnt spread the ashes back on the area of land affected by giant hogweed.

If composting you can only spread the resulting compost on the area affected by giant hogweed as there may still be viable plant material in the compost which could re grow.

Do not place any part of the plant dead or alive in the garden waste bin or compost heap.

Do not take the plant material dead or alive to the Household Waste Site as this is illegal.

The best way to dispose of the plant material whether dead or alive is to compost or burn the material in a garden incinerator. These can be purchased from DIY and garden centres and look like a metal bin with holes in.

This ensures the fire is hot enough to destroy all material.

It is illegal to move giant hogweed off site unless you have a special licence.

Do not put any plant material into the garden waste bin as you would be committing an offence.

Do not take the plant material dead or alive to a Household Waste Site as this is illegal.

Yes you can dig up giant hogweed to burn or compost on site. You’ll need to take precautions such as wearing protective clothing (including goggles).

Pages in Dangerous and damaging weeds