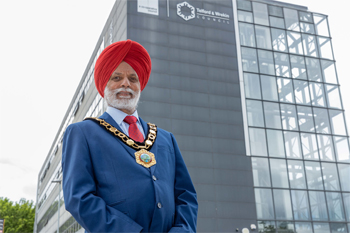 Councillor Amrik Jhawar was elected as Mayor for 2021/2022 at the Annual Council Meeting and Mayor Making Ceremony on Thursday 29 April 2021 for a historic second term. Amrik will be supported during his term in office by the Mayoress, Mrs Nirmal Jhawar.

Councillor Jhawar has lived in Telford for over 50 years with his wife Nirmal. Together, they have two grown-up children and four grandchildren.

Amrik began his career in 1969 working at GKN Sankey, Hadley for 11 years and then went on to work as an employee for the Royal Mail from 1980 until he retired in 2013. Amrik is one of three elected representatives for the Ketley and Overdale Ward, following from when he became a Borough Councillor at the May 2019 election, as well as previously holding the position of Deputy Mayor for 2014/2015.

Amrik very much looks forward to his second term as Mayor in visiting, celebrating and showcasing the many achievements and successes of the Borough of Telford and Wrekin. 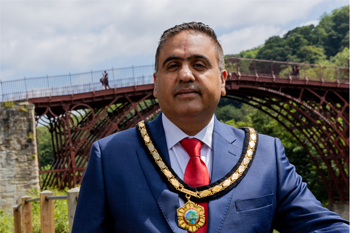 The Mayor will be supported during his year in Office by the Deputy Mayor, Councillor Raj Mehta who is one of two elected representatives for the Horsehay and Lightmoor ward.

Councillor Mehta was brought up in Anfield and after moving to Telford over 15 years ago, he lives with his wife Poonam and their two children, Swastik and Rahul. Raj became a Borough Councillor in the 2016 by-election and was re-elected in May 2019. He has also served as a member of Ketley Parish Council from 2012 – 2019 and was Chair of Lawley and Overdale Parish Council for 2020/2021 and is a Councillor of Dawley Hamlets Parish Council and Great Dawley Town Council. Raj continues his work in the community as a Trustee for the Leegate Centre and a Committee member of the Horsehay Village Hall.

Raj has been working with the NHS for nearly two decades and runs a medical practice in Birmingham, where he is also Chairman of the Health and Engagement Forum. In 2016, he was awarded by the Community Foundation, the ‘Inspiration Award for Health and Well Being in the Community’ and in 2017, he was awarded the ‘Bringing People Together Award’.

Raj has previous experience serving as a Police Constable for West Midlands Police for 10 years. He is Vice-Chair for the Confederation of Indians and has experience as an Interpreter for the UK Border Agency with the ability to speak in several languages including Punjabi, Hindi and Urdu.

Raj has been an ambassador for fundraising initiatives and has previously raised £20,000 to aid resources following the natural disaster in Gujarat in 2001 and a further £20,000 for the John Taylor Hospice and Severn Hospice in 2018. During his previous term in Office as Mayor for 2018/2019, Raj identified a gap between the younger and older generation in the local community and created his Building Bridges Appeal which he has continued as the Founder and Patron to deliver and expand within Telford and Wrekin. Through the Appeal, Raj has also implemented a plaque award scheme to acknowledge when both generations come together and make a pledge to Build Bridges. He also launched a Mayoral Grant Fund as part of this initiative to give back to the wider community, funding grants for the benefit of local voluntary organisations undertaking charitable activity in support of individuals in need but primarily focusing on voluntary groups which support the multi-faith community and broaden diversity.

Raj was appointed the position of Cabinet Member for Communities and Inclusivity for 2019/2020 and became a Trustee of the Citizen’s Advice Bureau. Raj also joined the Advisory Board for Sikh and Punjabi Studies at Wolverhampton University in January 2019 and he has more recently been appointed Chair of the first Interfaith Council of Telford and Wrekin. The Interfaith Council has been designed to build community ties and support cultural celebration along with most noticeably during the Covid-19 pandemic, delivering food packages for communities, where now the Interfaith Council are appointed as an official out of hours food bank delivery service for the Council, as well as joyful initiatives to lift community spirit and bring smiles to people’s faces where Raj travelled across the borough dressed as Santa, as well as following an appeal for help and donations, obtained two and a half thousand Easter Eggs the Interfaith Council delivered to the borough’s children and young people.

Pages in The Mayor